My Introduction to Jazz Guitar

Posted by DJ in Uncategorized on October 6, 2014

We’ve all got our own story of how we came to love jazz music and specifically jazz guitar, maybe some of you came to it recently or some of you were lucky enough to have been exposed to it at a younger age. For me I was lucky enough when I was 15 to be leant an album on cassette called “The Jazz Guitar Album” and it all started there for me. As a teenager in my bedroom playing guitar, listening to The Beatles and Jimi Hendrix the jazz guitar tape give me lots of questions but sadly not very many answers -’what on earth were they playing!?’ Although I didn’t *dislike* it, I didn’t really know what to make of it either. The names on the tape sounded very exotic like the music within – Oscar Moore, Django Reinhardt, Bola Sete, Herb Ellis etc. 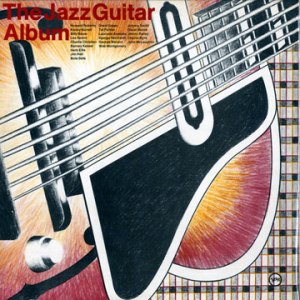 1. Howard Roberts – Relaxin’ At Camarillo
Talk about a shot in the arm to start with! A great Parker bop track taken with incredible energy and an all round great group performance. I love the solo he takes on this; a less natural intuitive guitarist may have gone for another take to try and get it ‘perfect’ but you’d never get close to this again. For such a great natural guitarist it’s interesting to note that he’s remembered more for his involvement with education.

2. Kenny Burrell – Terrace Theme
Cool. Very cool. This track sounds like it might be a straight forward blues but then shows it’s hand with some slinky harmony over the B section. What a sound Kenny gets, I’m not sure anyone got a sound like him in jazz/blues.

3. Billy Bauer – It’s A Blue World
If you talk to any guitarist about close harmony jazz guitar they will no doubt (and quite rightly) talk about Johnny Smith BUT one of the greatest exponents was Billy Bauer. One of the (almost) forgotten greats of jazz guitar, please do search out this track as it’s such a great performance and if anyone has time to transcribe it then drop me a line!

4. Les Spann – Wrap Your Troubles In Dreams
Ah Dizzy Gillespie, one of my obsessions from a few years ago (and the name of my cat). This tune is not one that many modern jazzers have played (Bill Evans did as well as Diz) and I’m not sure why as it’s a great tune with some great movement in the chords in the B section to play off. Not content with being a great guitarist Les Spann was a flute player of great skill too.

5. Charlie Christian – AC-DC Current
One of the founding forefathers of the modern jazz guitar movement. Still can’t fathom how he imagined and played all that great music before passing away too young at only 25 years old- just think about that!

6. Barney Kessel – All The Things You Are
7. Herb Ellis – Gravy Waltz
Two more masters of jazz guitar. Such great taste and tone; performances like these makes you realise why they were such legends.

8. Jim Hall – All Across The City
This really stuck out in amongst the other tracks on this album and it’s such a sparse arrangement compared to a lot of the others just featuring Bill Evans and Jim. A lovely melody and one that sticks with you and makes you realise that sometimes less is more.

9. Bola Sete – Soul Samba
Bola was discovered by Dizzy Gillespie and went on to carve out a great career which blended together Samba and Jazz in a creative and energetic way, miles apart from the Bossa Nova movement. In recent years having seen his performances on Youtube I can say that he was the happiest guitarist in the world, so infectious! To my ears at the time this tune sounded a little odder compared to the others, less chord movement but more rhythm and percussion in the guitar playing. What a master!

10. Grant Green – That Lucky Old Sun
I could write an essay on Grant Green (maybe I will one day) and how he influenced my playing. I go through Grant Green obsessional phases every so often but I have to say that this isn’t in my favourites list. It’s not a bad performance (except maybe the slightly out of tune flute) but there’s lots more to celebrate in the Grant Green back catalogue.

11. Tal Farlow – I Remember You
Another stunning performance and one which I transcribed a few years ago. Tal really played unlike anyone else mainly because of his physical attributes; he had big hands and dwarfed any guitar he played and made big interval leaps easy and therefore they just became part of his jazz language. Everyone else was blown away including a young George Benson who has cited Tal amongst others as a big influence.

12. Laurindo Almeida – Samba Da Sahra
Very stylish track with the ever smooth tones of Stan Getz. Great chord movement in this self penned tune, deserves to be played more.

13. Django Reinhardt – Nuages
His signature tune this time performed with a big band, some lovely artificial harmonics in the solo.

14. George Benson – What’s New
I’ve listened to so much GB in my life and this track was a great introduction to start searching out his work. Worth noting the great young Herbie Hancock on this track.

15. Wes Montgomery – Four On Six
Not a lot can be said of Wes that hasn’t been said already. Every note of this is carved into our heads, what a great solo!

16. Johnny Smith – Sweet Lorraine
It turns out that this was a fairly rare track. All the amazing trademark chord work is present and correct, I literally couldn’t work out (and still can’t) how this was at all possible!

17. Oscar Moore – Oscar’s Blues
18. Jimmy Raney – Buddy’s Blues
Oscar Moore was one of the important early exponents of modern jazz guitar and Jimmy Raney was one of the bebop masters. I’m glad these tracks were on the album as I looked further into their playing in later years and found much to listen to.

19. Charlie Byrd – Samba Triste
Early on I got the Byrd/Getz albums and they are essential listening to students of jazz, such great playing and compositions.

20. John McLaughlin – Binky’s Beam
Now this one really foxed me as there seemed to be some clever odd time signature stuff happening in this track and it had a great raw sound to it. It spurred me onto discover probably one of the most influential musicians I’ve ever heard. Not traditional jazz guitar, something very new and exciting was happening here..

A year or so after that there was an offer in the Sunday paper where you had to collect some tokens to receive a free CD. There were 4 in the collection (Saxes, Groups, Piano and Guitar) and I managed to get all of them mainly because I was still intrigued and I recognised a couple of names of the players. 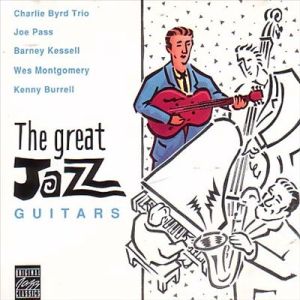 There was no looking back now and the other CD’s in the collection started to broaden my appreciation especially for Sonny Rollins and John Coltrane. Joe Pass’ tune on this album was the first time I’d heard anyone deal with jazz on a guitar as a solo instrument. I loved that tune so much I tried to learn it from the album and although I thought I had it down pretty much perfect, time and wisdom showed me otherwise. Oh well I was never going to be a solo jazz guitarist!

Do search out these artist and tunes if they are unfamiliar to you and hopefully they will inspire you like they did (and do) to me.